We, the team of 12 IBMers coming from different parts of the world lived in Arica for a month and had a chance to feel the Chilean spirit.

We were thrilled to receive an invitation from our host, Jose to watch the Chile vs Argentina match in his house on 23rd Mar. On the morning of 23rd, Zach (our team member from USA) was surprised to receive many requests from the team to buy Chilean football jerseys for them. He soon found out that Tommy (our team member from Ireland) had just posted a picture of himself wearing a Chilean football jersey which had triggered the wave. Zach had bought some for himself and for Tommy the previous day, as it was close to the gym Zach goes to often.

So, Zach and Pam (our Chilean Project Assistant), spent two hours in the market searching and negotiating the prices for it. Of course, all that bargaining did not work as there was a lot of demand for it and the vendor knew they would buy it anyway. Zach swore that he would give Tommy a hard time for showing off his Chilean jersey to the team in the first place :-).

All twelve of us dressed in Chile team jerseys landed at Jose's house around 7:30pm. Jose's family welcomed us warmly and shared their home with us that evening. There was a barbeque area, a beautiful garden and a party hall with a wall mounted plasma TV, sofas, chairs and dining table all set with plates, glasses, food and drinks. We quickly gobbled some of the delicious grilled meat and bread and settled in front of the TV. The match started at 8pm. 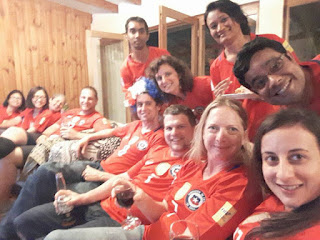 Our jerseys had one of these numbers - 7, 8, 11 and 17. Everytime we saw Alexis, Vidal, Medel or Sanchez with the ball, people with those numbers would look at the screen nervously, except for Dora (our team member from Hungary) who was nervous for all the players :-).

We anxiously watched the game and became sad when Chile lost ... WE lost. Its the day we became Chileans !

Three of our team members in Chilean red jerseys were in the middle of the hall screaming their lungs out 'Chi chi chi Le le le, Viva Chile'. We quickly joined in. We were wearing our Chile jerseys too. Within the next few minutes, Chile struck another goal. We jumped and screamed even louder. To add to our joy, the restaurant gave free snacks to anyone who came in wearing Chilean red jersey :-).

At the end of the game, we celebrated as Chile won ... WE won. Its the day we became Chileans ! 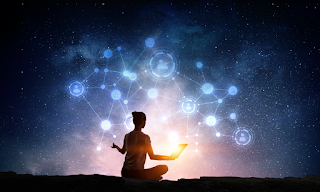